ARE YOU a weight or measures angler? Measurising has become more popular in the UK. Angler's Mail columnist Dr Ian Welch explains more to help you understand it....

Measuring fish, like this chub, is becoming more popular in the UK - but it's huge across Europe.

Measuring fish is a long-established practice on the continent, where most fishers, particularly predator anglers, have always tended to measure their fish rather than weigh them.

European lure fishing events are judged on accumulated metres and centimetres of the fish landed, rather than kilos and grams. A specimen pike or zander is regarded as 100 cm or 75 cm respectively, as opposed to 20 lb or 10 lb.

Sea fishers have long become accustomed to measuring their catches, too, as there are strict legal limits imposed on the size of fish that may be retained.

Perhaps the most notable of those is with reference to bass (Dicentrarchus labrax). This species has been subject to strict and arguably unfair regulation for recreational anglers in recent years when compared to commercial exploitation. For reference, the current bass size limit is 16.5 in. (42 cm).

The practice of measuring fish is gaining traction, because it is deemed to be less stressful for fish than the weighing procedure.

Despite advances in mat and sling materials, technology and increased information on handling techniques, weighing still requires a fish to be out of the water for minutes. Measuring takes seconds, and can even be done with the fish still in the water.

Unless you require an exact weight for records, the results achieved by measuring fish tend to be reasonably consistent and accurate.

With modern scales being compact, accurate and affordable, all anglers who want to know the weight of a fish can do so easily, even if they are travelling light, but this wasn’t always the case.

The only way of recording the size of fish in times gone by was with a tape measure, a piece of string, a mark on a net or gaff handle, or a branch.

60 lb scales for carp and other big fish 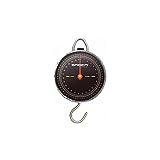 A number of length-for-weight charts were produced for a variety of species.

The most famous of them all was Mona’s Pike Scale, which estimated a 40 in. pike to weigh 20 lb. It’s a measure that will be very familiar to many older anglers.

Mona’s Scale, and indeed all the others, did not allow for a measure of the condition or girth of the fish. And at best it gave only a rough estimate of an average fish, and certainly one not carrying spawn.

An average 40 in. pike caught from an average gravel pit during the pre-spawn period may well weigh around 20 lb. But catch a 40 in. specimen from a trout reservoir and it could weigh well in excess of 35 lb.

Similarly, the strain of fish, productivity of a water and seasonality all make length an unreliable estimate for weight if taken in isolation.

Game anglers, particularly UK salmon anglers, who now mostly practise catch-and-release fishing, have an improved system at their disposal. A number of online ‘calculators’ that allow you to input length and girth to give an accurate weight. And it’s often in relation to the river from which the fish was landed.

I have certainly used these to good effect in the past to judge winners of the Charles Farlow Trophy, a prize awarded annually to the captor of the largest salmon from an English or Welsh river.

Ghillies and charter boat skippers have experience on their side, too. And their calls are usually close enough to give a good idea of weight, be it for salmon or marlin, but everyone is deceived at times.

If you are measuring your catch, it is important to do so correctly. There are three different fish measurements that are recorded by fishery scientists.

It is measured with the fin lobes compressed along the midline, and is a straight-line measure, not one measured over the curve of the body.

The length of a fish measured from the tip of the snout to the end of the middle of the compressed caudal fin rays.

The length of a fish measured from the tip of the snout to the posterior end of the last vertebra (the length of the fish excluding the caudal fin).

Generally speaking, standard length tends to be used only for a few specific marine fish groups, total length measurements are used for marine minimum landing size regulations, and the fork length is the one most used by coarse fishers.

I have included here a few of the old length-for-weight charts from the archives (in inches, pounds and ounces).

Now we can get out fishing again, why not have a bit of fun and weigh and measure a few of the fish that you catch and see just how accurate the old charts still are. It was a very different era in terms of fish and fisheries from the one that we know now. 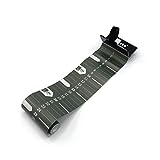 MADE A FINE CATCH OR GOT A  STORY OR  VIEWS TO SHARE WITH US? Email us, with or without photos, to: anglersmail@ti-media.com YOU could get into print with us.

For the best exclusive content, read Angler’s Mail magazine. Click here to find out how to get your copy every week.

There has never been a better time get AM print magazine sent direct to you… each and every week.

YOU hook a fish, play it, land it… and then what do you do? Some anglers slip the fish…

The list is run by the British Record Fish Commitee, and has come under scrutiny in the wake of some…