Colin Mitchell, in his pleasure fishing blog, recounts his latest session... warts 'n' all! It doesn't always go smoothly, and it can be bloody painful (like this), as you probably know yourself...

SOME days just don’t got to plan – even when they start off well.

The weather forecast was, for once, right. Overcast, dry and an end to the pouring rain of the past few days.

Music Mike was, as ever, bang on time when I went to pick him up. But then things started to go pear-shaped. 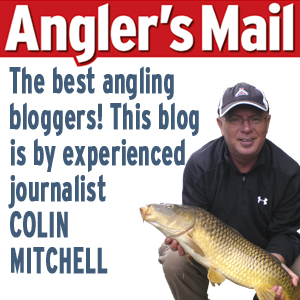 We had left home a bit later to avoid the traffic – but got stuck in a jam caused by some temporary traffic lights.

Then there was the usual idiot who decided to weave between lanes and nearly pranged more than one car. Did I say he was a BMW driver?

Although there were already a few anglers on the lake by the time we got there it wasn’t too busy. And bonus in that two swims we fancied, in corners, were still free!

Normally at this place your float goes under first drop in. It didn’t! But after a few delicate knocks and some nuisance small skimmers I got my best bite of the day.

The shame of this was that it was me who got bitten. By myself! A bit too keen to nosh my pasty I also chomped my tongue really hard and started to spit blood.

Never mind some good sport would take away the pain. Well it would have if my rig hadn’t been dragged straight into some overhanging brambles by the first good carp I had hooked.

After losing just one hook during my past few fishing trips here was a whole rig going west. And if was a perfectly balance one set up lovely for the swim.

A new rig was slipped on and although it wasn’t quite right it would do and a few fish followed…until the float decided that sometimes it would dot down right and other times it would stay up in the water.

I can only presume water was getting into the float’s body or there were floating pieces of rubbish under the surface as I had hooked a few stray leaves.

Whatever the cause I decided that it would be better to fish the shallower water closer to the bank – but not before trying the slightly deeper hole to my left, right in the margins.

I laid out the rig with a nice piece of corn and before I knew what was happening the float shot away, the elastic shot out and the fish had seen me off.

I’m a fan of this stuff!

Ok, it really was time to set up another rig, a dibber for the shallows along to my right. It looked well neat in the water and got me a carp first chuck.

Then…well you can guess by now what happened. Those brambles struck again only this time the rig would not come free. Good stuff this Powerline! Sadly it wasn’t good enough to pull out the brambles and get my rig back.

The previous week I had warned a fellow angler never to pull a snagged rig straight back in case it snapped and the float came back like a bullet and whacked his hand.

I know what you are thinking…no I did not pull straight back. I sank my pole tip and pulled from the puller bung. The right came free, came back like a bullet, pinged out from below the surface and whacked into my hand!

There was blood everywhere and pain. I grabbed my towel and wiped away the mess to find a tiny indendation that was pouring blood. But there was an immediate swelling and bruising.

I fished on, caught a few more, including two carp into double-figures, before the pain became too bad to continue, my thumb almost locked up and my hand unable to hold the pole.

Just one last drop in I thought – as the wind gusted, caught my shallow rig and snagged it into the brambles. Time to go home…

At least having to pack up a little bit earlier did give us one lucky break – just after we had left the car park the heavens opened up as yet another downpour began.

REGULAR readers will know that my travelling partner, Music Mike, and I often share the bank with an assortment of Chavs, Deckchair Dereks and Annoying Andrews.

It’s not by choice. They just appear. It’s a bit like how the nutter who won’t stop talking always tends to sit next to you on the bus. They always used to target my Dad too!

Last week Mike went out on his bike for a quick, quiet fishing session at a local pond, just an hour’s break from household duties like painting. 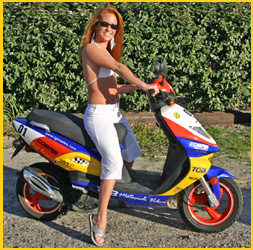 Woman on scooter… but not this one!

This really is a small pond we are talking about but it is quite nice and there is a seat for people who want to enjoy the scenery.

The problem was that the woman on the motorised scooter, armed with various bottles of booze, along with her friend who appeared to have consumed quite a few bottles already, preferred to sit right behind Mike.

Then a woman with two kids, both armed with little fishing nets, also decided that there was safety in numbers and the three of them decided to share Mike’s swim.

Why nothing is certain in angling – by Colin Mitchell