In his popular weekly blog, Colin Mitchell learns a lesson or two about pole fishing.

MANY years ago, when pole fishing in the UK was still in its infancy, former World Champion Ian Heaps issued me with a friendly warning. He said not to pick up the pole every time I reached into my holdall.

Heapsy, who could probably catch a fish on a bent pin and cotton from a bucket of water, pointed out that sometimes a rod and reel could outscore the pole. A pole was great for fishing to features – even those underwater ones that you can’t see – but the rod and reel must never, ever be forgotten.

Ian’s warning was lodged in my brain. I knew he was right. Yet so often in recent times I have seen anglers flogging a dead horse on the pole (not literally of course!) when they should be threading line through rod rings. Yet I became a victim myself last week. I decided to have one of my now rare outings onto the match circuit and as soon as I got to my peg I knew I needed to set up a waggler. I didn’t…

Up went three pole rigs, two for down the edge, one for 11metres where it flattened off, plus a Method feeder just in case the pole didn’t work. Yet my open water peg screamed waggler, fishing a bait up in the water or, at the very least, a slow sinking one. In my defence one around me set up a waggler. In fact just a one guy ran one up and he only had two casts with it.

I couldn’t catch long, I got most of my fish short, lost four fish that smashed me to pieces and was beaten by two weights. I stupidly swung a fish I should have netted on a difficult day and it dropped off. That was one guy who beat me. The other angler was well in front – but those lost fish, or at least two of them, could have put me close. At the end the guy just in front of me asked if I had tried the waggler. It was his first question…

I confessed. He reckoned another match had been won from my peg – or the one next to it – using the bottom end only float. I knew that peg next to mine had won a match on a pole. Even a few hours into the event, when I knew fishing was not going to plan, I resisted investing ten minutes in running up a waggler. There was a rod in my holdall and the float were in my box. I’ve learnt the lesson. I think. Until next time anyway…

On a different note, I DID have a nice day’s fishing and DID do something right.

The guy who won used banded pellets. The angler I spoke to at the end had also caught on pellet. I couldn’t get a bite on them…I went through the baits in my bag, maggot, corn, hard and soft pellets and paste. But it was my own personal bait of the year that caught most – meat!

An angler just along from me, who had struggled for bites, asked what I had used. I never hold stuff back so told him it was the good old Spam, punched out to pellet size. He admitted to having some in his carryall but never even opened the can as he thought pellet was the key bait. At least I’m not the only one who sometimes doesn’t do what he should to catch a few more.

At the other end of the venue, not in the match, was my travelling partner Music Mike. He’d managed to get one of his favourite pegs and hammered out the carp and caught on the pole, with meat. It’s a tight peg with no really open water so you fish to the rushes that stick up around you. There are normally two – yes just two – blades of rushes that stick out from the main clump. One had gone so Mike fished next to the other single strand. All of his fish came from that spot. Was it because it was a good marker for his feed and float or was there something both he and the fish knew?

We’ll never really know but at least it worked! 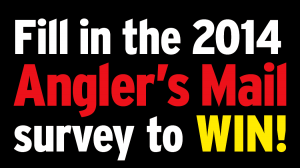 Tales of disaster from Colin Mitchell

Why nothing is certain in angling – by Colin Mitchell