Angler’s Mail assistant editor / production Richard Holroyd, in this AM blog, reveals some of the tactics and customs that can be incorporated from coarse fishing into sea angling. Great sea fishing tips!

IN coarse fishing you often hear of carp anglers and match anglers taking certain elements of each other’s tactics to help them catch more fish.

In fact, if you take a closer look at all the different types of disciplines in coarse fishing, you’ll find quite a few of the tactics and methods do overlap.

Being both a keen sea angler and coarse angler, over the years I have seen the benefits of taking some of the methods and practices used in coarse fishing and adapting them into my sea fishing to help me catch smarter.

It’s also true to say that I’ve used some of the tactics in sea fishing to improve my coarse fishing but I’ll reveal these in a later blog.

Clipping up / marking the line

Accuracy is one of the key cornerstones to success in coarse fishing. Being able to continually put your bait in the same spot will help you catch more fish and clipping up and marking your line helps you do this.

Lots of coarse anglers like to clip up to accurately target far bank fish-holding features, for instance. In sea fishing there are not so many obvious, visible, features to fish to but I often scan the beach at low tide, looking for any depressions, clear spots in between rocky areas, patches of lugworm holes etc, and target these areas at high tide.

To be able to fish on and near these areas, at low tide I put the lead on the spot I want to fish and then walk to the high tide mark line, paying out line as I go. I then know the distance by marking the line with a bit of electrical tape.

Coarse angling in the UK lead the way when it comes to correctly handling, unhooking and returning fish safely. I’ve lost count of the times I’ve seen sea anglers drag fish up the beach, struggle to unhook them and then toss them back to the sea with little regard to the fish’s welfare.

Where possible, sea anglers should walk to the water’s edge and unhook them there, with the use of a disgorger or other unhooking tool if necessary. Then hold them in the water and let them swim away when they are ready.

If you are going to take fish home for the pot, then it’s best to kill them as quickly and humanely as possible using a spike, knife or priest, rather than putting them in a plastic bag or bucket of water for them to suffocate slowly.

I don’t think it is always necessary to use a powerful beachcaster when fishing from the shore. I, and my children, often use a lure rod or feeder rod as they are much easier to handle and fish are a lot more fun to play to the shore using these types of rods, rather than overgunned beachcasters.

I’ve always preferred to use multiplier reels, but my children find it easier to use medium-sized fixed spool reels. Whatever reel you use, give them a good rinse in running freshwater after use to wash all of the potentially damaging salt away.

The importance of scaling down in coarse fishing is crucial when it comes to catching fish, particular in the colder months. You often see sea anglers using heavy, coloured line, when a far better option is to scale down to a sensible strain of line. Providing you are not fishing in snaggy areas and don’t need to cast a heavy lead, then 8 lb line is sufficient for lots of sea species.

Feeder fishing is used to devastating effect in course fishing to draw fish to the hook bait and, although used to some degree in sea angling, could be used far more effectively. I sometimes use a feeder from my kayak when fishing near wrecks and reefs. I cast the feeder uptide of the underwater features and let the tide wash the attracting bait into them. It pays to use different sized baits in a feeder to leave a trail of enticing baits to your hook bait.

There are some incredibly active, caring and dedicated groups in the UK that do a lot of work to fight the corner of coarse fish to ensure their future is a bright one. They not only campaign against current threats to coarse fish – predators (cormorants and otters), pollution and habitat destruction – but also help to restock fish and rebuild habitat when they have been decimated.

It is a lot tougher and often frustrating for sea anglers due to legislation allowing commercial fishermen (many of which are come from overseas) to rip up the sea bed and take dwindling numbers of sea fish.

Sea anglers can help, though. Get involved with the Angling Trust who are active in campaigning to try and safeguard existing sea fish stocks and looking at solutions to increase populations of sea species. We should set an example and try and put back as many fish as possible and increase the minimum landing sizes.

Bass, for instance, are in massive decline and to try and help their future the Angling Trust are calling for significant reductions in commercial fishing for bass and to end targeting them when they are about to spawn. Join them or visit their homepage to find out how you can help.

Developed by carp anglers and now used incredibly effectively for not only carp, but other coarse fish too, I think there is also a place in sea fishing for hair rigs and it is something that I’ll be exploring soon. If you’re not cure about the knotless knot, which is dead easy for creating a hair rig, click here.

I’ve been currently trying to target cod using big baits and hooks but my bait keeps getting striped by whiting – a fish that has small needle-sharp teeth. Occasionally they’ll hook themselves but I’d rather not catch them. A solution is to hair rig baits. That way I can avoid hooking whiting but still hook a cod should one come along.

There have been other ways that I’ve presented baits in the past for sea fishing that I’ve taken from coarse fishing tactics – using Fox Arma Mesh to present crab baits rather than using elasticated thread for instance – but I’m sure there are lots of other applications that I haven’t used or thought of yet, that could improve my catches. 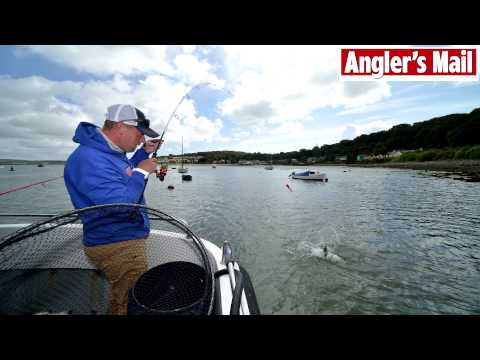 Great efforts to conserve fish stocks in Courtmacsherry, Ireland, has resulted in some special sea fishing action… and Steve tasted…

Many anglers target bass throughout July and August but come September and October the number of bass anglers dwindle. I…